June 16, 2012 Since there is not a lot of action right now at the rock, I wanted to share some behavioral actions that are happening as we speak. The south side female has been perched for about 40 minutes. As one of our visitors was watching her through one of our spotting scopes, she launches off the perch and circles the face, then out around to the ocean side of the rock. Within two minutes she appears from around the front of the rock carrying a shorebird in her talons. As she crosses the bay toward the sandspit, she lowers her legs still clutching the prey for a few seconds, then brings them back up close to her body. She repeated this gesture several times until one of the young flew up to her. She then dropped the prey for the young to catch which it did. What I have tried to describe here is much like an aircraft lowering its main landing gear several times with a big banner between the wheels that says “Dinner.!”

I’m sure I’ve seen this before, but I never grasped that it was an advertising gesture. I’ve been carefully watching this activity for the past three days that she has done this. 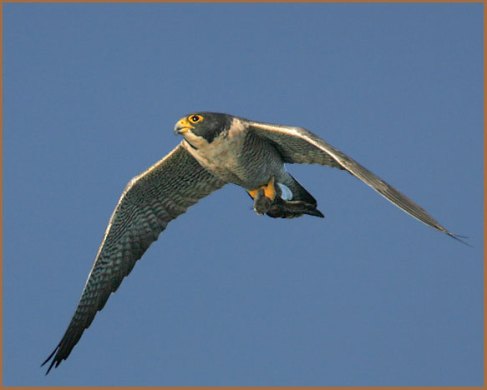 We are a 501(c)3 charitable educational organization. We raise scholarship funds for CalPoly students studying biology. The Pacific Coast Peregrine Watch is here to inform birders, students and all people who are eager to know about these handsome peregrines. We want you to enjoy and be able to use our on-site powerful spotting scopes. We are available to answer your questions about the pair of falcons that have been observed for many years.
View all posts by Pacific Coast Peregrine Watch →
This entry was posted in falcon, hunting, juvenile, peregrines, survival. Bookmark the permalink.