Elk at the north end of the Hearst Ranch… 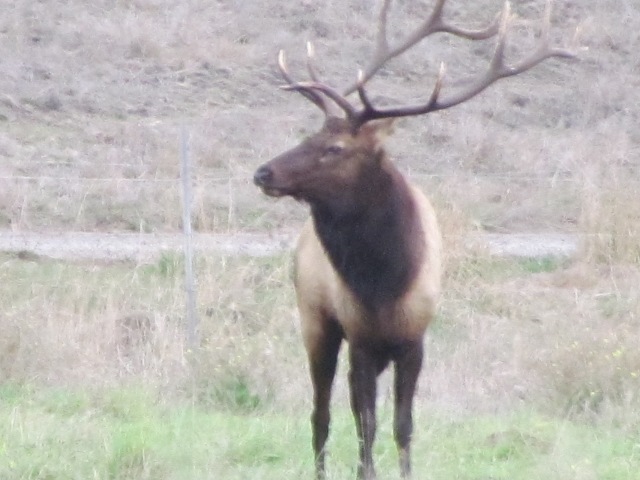 Correction: The elk at Hearst Ranch are Rocky Mountain Elk not Tule Elk as mentioned previously. Below is the information that I found at http://www.hearstcastle.org

“Dismantling of the Hearst Zoo”    The dismantling of the zoo began in 1937 after William Randolph Hearst experienced great financial difficulty and was forced to curtail his construction activities and cut other expenses at the ranch. Many animals were donated to public zoos or sold. Dispersal of the zoo animals extended over more than fifteen years and it was never entirely completed. Most of animals had been placed by 1953, two years after Mr. Hearst’s death, but many animals were permitted to range free on the ranch. In 1958 when the State was given Hearst Castle, there were Rocky Mountain elk, tahr goats, llamas, white fallow deer, zebras, Barbary sheep, and sambar deer still on the ranch. Today, few of these animals survive, but often zebra may be seen grazing in the pastures along Highway 1 near the town of San Simeon.”

We are a 501(c)3 charitable educational organization. We raise scholarship funds for CalPoly students studying biology. The Pacific Coast Peregrine Watch is here to inform birders, students and all people who are eager to know about these handsome peregrines. We want you to enjoy and be able to use our on-site powerful spotting scopes. We are available to answer your questions about the pair of falcons that have been observed for many years.
View all posts by Pacific Coast Peregrine Watch →
This entry was posted in mammals. Bookmark the permalink.