Never too young to learn… 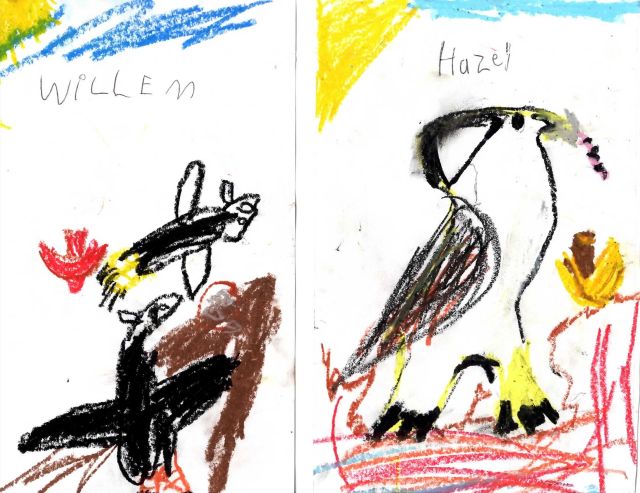 The other day, sitting at the rock in my usual location, binoculars in hand, tripod and spotting scope mounted at the ready, I was approached by two young precocious youngsters with their parents.
The smaller of the two said, “I know what you’re looking at.”
“Really?” I replied, “What’s that?”
At the same time, brother and sister replied, “Peregrine falcons. They’re the fastest thing in the whole wide world.”
For the next few minutes they talked so fast telling me everything they knew about falcons, I could hardly follow them.
Looking at my album with many photographs that I didn’t take, the five-year-old Willem said, “ Don’t you have one in a stoop? That’s a dive you know, like this.” He jumped up and held his arms back along his sides with his head down and said, “Like this!”
I replied, “Keep looking through the album, you’ll see one.”
The older sister, Hazel, six years old said “Like this!”
Willem said, “No! Faster!”
They were so cute and animated. They knew more than most adults that passed by here. They left after I gave them both photos of the falcon, Willem’s in a stoop like he wanted. Needless to say they were thrilled.
Two days later they returned with a gift I will treasure, their drawings of the falcons which I entered into the photo album where they will remain.
Happy trails, Bob
P.S. This is education; this is what we do. ~Heather

We are a 501(c)3 charitable educational organization. We raise scholarship funds for CalPoly students studying biology. The Pacific Coast Peregrine Watch is here to inform birders, students and all people who are eager to know about these handsome peregrines. We want you to enjoy and be able to use our on-site powerful spotting scopes. We are available to answer your questions about the pair of falcons that have been observed for many years.
View all posts by Pacific Coast Peregrine Watch →
Image | This entry was posted in artwork, Bob Isenberg, education, falcon, peregrines, visitor. Bookmark the permalink.

4 Responses to Never too young to learn…