Luncheon on the Bay… 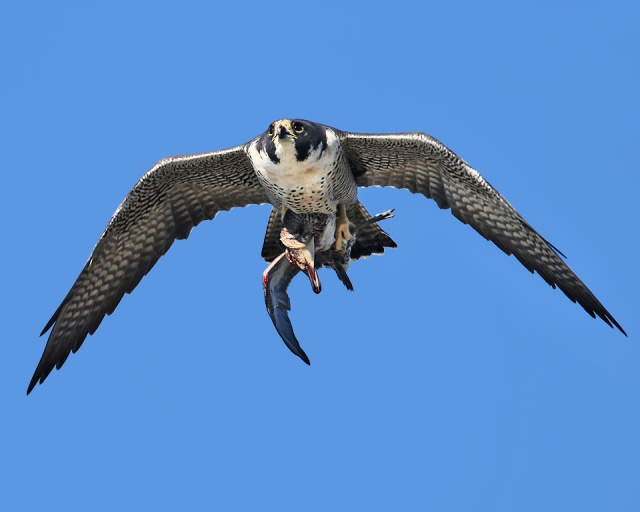 The photo accompanying this text is of our transient female falcon, “Doris,” in her fifth year of wintering in nearby Baywood Park. She is seen here with a Teal. The photo was shot by Cleve Nash from behind the little coffee shop on 2nd Street. She landed in her favorite tree, a cypress, where she decapitated it, plumed it and consumed it.

A few notes to bring you good followers up to speed on what’s been happening on Morro Rock and in the area. Breeding is happening on both sides of the rock, not quite in full swing, but at least a couple times a day copulating falcons have been observed. There could be more when they are out of view.
Red Tailed Hawks abound here every day and the peregrines chase them incessantly. I’m sure this adds to the excitement, often after high speed combat, they come to one of her bedroom rocks and fool around again.
On the lighter side, a young adult kestrel male has visited us and perched up high in a willow run for the last five days. He’s very bright in coloring and gorgeous to look at. On the second day, the resident male falcon stooped on him and missed. The kestrel dove deep into the willows beneath him then back up on the same perch in a minute. The male falcon can see him from where he sits, but has not dived on him since. He’s either very confident in his ability to elude or very stupid.
Happy trails, Bob
P.S. See you at the Morro Bay Winter Bird Festival, January 18-21, 2013. http://www.morrobaybirdfestival.org

We are a 501(c)3 charitable educational organization. We raise scholarship funds for CalPoly students studying biology. The Pacific Coast Peregrine Watch is here to inform birders, students and all people who are eager to know about these handsome peregrines. We want you to enjoy and be able to use our on-site powerful spotting scopes. We are available to answer your questions about the pair of falcons that have been observed for many years.
View all posts by Pacific Coast Peregrine Watch →
This entry was posted in breeding, feeding, migration, other birds, peregrines. Bookmark the permalink.

6 Responses to Luncheon on the Bay…